A grey sidewalk on Heimdalsgade at Nørrebro is undertaking a great face lift. THIRD NATURE’s water handling Climate Tile is going to be tested in use. At the same time the office is experiencing great interest from abroad and the first step towards entering the Canadian market has been taken.

The tile has been developed for future sidewalks and will handle the effects of climate change. The purpose of the 50 m long pilot sidewalk is to see the Climate Tile in action throughout the seasons and collect data on how it manages different weather types, weight loads, salting, etc. The collected data will be used to make the final adjustments to the tile before sending it to industrial production and out on the market. The pilot sidewalk, constructed and carried out by Malmos, is expected to be inaugurated after the summer vacation.

PLUG & PLAY CLIMATE ADJUSTMENT
The Climate Tile is a modular system that allows for drainage and control of the rainwater in all directions. The tile is combined with an underground water bank that can be used by both trees, users and the city’s road sweepers. The pavement still maintains its basic function, but at the same time allows for a local water circuit that adds shadow, micro climate, urban nature, play and learning to the urban spaces.

Copenhagen has 750 km of pavements and the global need for local climate adaptation is enormous. Therefore, new Plug & Play solutions are needed to be able to climate adapt on a global scale. The Climate Tile has been designed by THIRD NATURE and developed in collaboration with IBF and ACO Nordic, as a new innovative climate adaptation solution aimed at the densely populated cities. The solution takes advantage of climate challenges as a driving force in the development of more robust, experiential and sustainable cities. 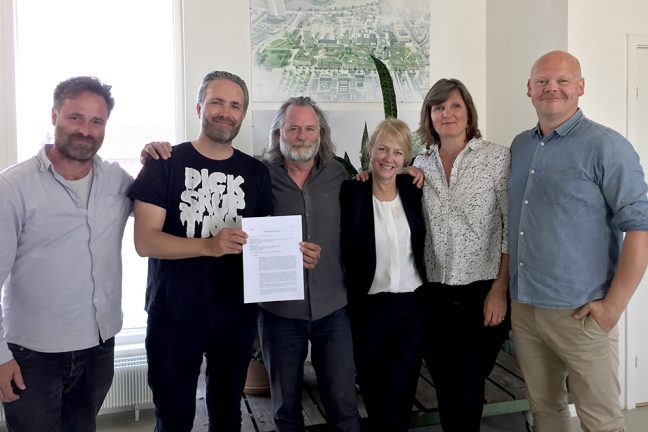 CANADIAN PARTNERSHIP
While the pilot -sidewalk is under construction in Copenhagen, THIRD NATURE has signed a cooperation agreement with Canadian Waverley Projects, based in Toronto. The agreement will examine the possibilities for adapting the system to Canadian conditions. Waverley Projects will work with several local partners to develop and produce the solution for the North American market.

On a 50 m pavement stretch at Nørrebro in Copenhagen you can now walk on water. A pilot sidewalk for the innovative climate adaptation project The Climate Tile will be inaugurated September 27th

END_OF_DOCUMENT_TOKEN_TO_BE_REPLACED

On a 50 m pavement stretch at Nørrebro in Copenhagen you can now walk on water. A pilot sidewalk for the innovative climate adaptation project The Climate Tile will be inaugurated September 27th